The project aim is to investigate the urban necropolises of Pisa between Late Antiquity and the early Middle Ages, through methods of spatial analysis and social network analysis. In particular, it concerns the study of the distribution and typology of burials in urban areas to highlight at topographical level the relationships between burial areas and Christian topography, the ethnic, social and (where possible) family composition of cemetery areas, the dissemination of the produced dataset as open data through the MOD repository. The work takes place within the MAPPA Laboratory and it is part of quantitative and computational archeology.
The starting point for data collection was the database (RDBMS) of the MAPPA Project; from here were selected all the archaeological interventions that returned burials and the related documentation. In the cases in which this was not present, we proceeded with the examination of the published material and the gray literature (thesis, doctorate, specialization). It was collected information, of different quality, related to 503 burials, of which 307 complete with anthropological data and 62 with funerary kit.

Within the MAPPA Project database have been made two new tabs (tables) for the documentation of burials and osteological remains. Furthermore, has been created a user form that summarizes all the information collected for each burial. 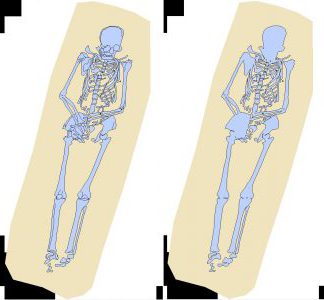 The georeferencing, vectorization and subsequent spatial analysis of the collected data took place in the GIS environment with the ArcGIS software. On the map of the city of Pisa, when the documentation allowed it, the overall dimensions, the elements of the container, the funerary kit and the bone remains were vectorized. When the single grave could not be vectorized due to lack of documentation, the entire excavation area or sector was vectorized.

The project is structured on four layers: one for the representation of the container and/or the size of the burial, one for the bone remains, one for the funerary kit, one for the characterization of the skeletal remains. The first two layers are polygonal graphs. The “anthropological data” layer contains information regarding the bone remains; when possible the skeleton was placed in plan and the bones were drawn separately. Then all the elements that compose an individual were combined with the Merge tool. For the funerary kit was used a “material” layer characterized by a point graph.

The need to describe particular graphs such as those depicted within individual bony elements (eg orbits, subdivision of vertebrae, etc.), or important information (eg hands resting on the pelvis, etc.) that are dissolved with the use of the Merge operator (see supra ), led to the creation of the “characterization” layer. This, represented by a linear graph, does not record useful information for the analysis, but allows to visualize better the remains of the individual.

The final result of the GIS project was not only a map of Pisa with all the geographically positioned funerary findings, but also a searchable and analysable geodatabase.
In addition to analyzes on age at the time of death, sex, accoutrements, etc., have also been made spatial analyzes. Density analyzes reveal how over the course of time the cemetery areas seem to have moved from the northern area of the current urban settlement towards the south, in relation to the presence of the proto-urban and urban settlements. In particular, we note how the importance of the area of the current cathedral emerges from the Late Antiquity and lasts until the early Middle Ages. To this are added sepulchral areas to the southwest in Roman times, to the west starting from the early Middle Ages and to the south during the Low Middle Ages, when the cemetery areas, related to the Christian topography, expanded within the walled city.